Heading into the 2019 World Series of Poker (WSOP), Stephen Chidwick had more than $23 million in live tournament earnings, with 52 WSOP cashes and 13 final tables.

But despite that impressive record, the British poker pro had never captured a WSOP gold bracelet. All that changed over the weekend when he took down Event #45: $25,000 Pot-Limit Omaha High Roller.

The event drew a total of 278 entries, 48 more than the previous edition, setting a new record. It featured an astonishing $6,602,500 in total guarantees, with the top 42 spots finishing in the money.

Chidwick defeated Taiwanese player James Chen heads-up to claim his first bracelet, and the top prize of $1,618,417, the biggest prize awarded thus far during the 50th year of the WSOP.

Some of the players making the final table were experienced pros and bracelet winners, including eighth-time WSOP champ Erik Seidel, who was eliminated by James Chen in sixth place for $264,186. Chidwick sent Alex Epstein to the rail in fifth place ($359,320) which helped him regain control of the table.

The next player to leave the table was Robert Mizrachi, who ended up in fourth place earning $497,112. Chidwick continued his knockout streak, eliminating American player Matthew Gonzales in third place after completing a backdoor flush draw. Gonzales won $699,364 for his third-place finish.

Chidwick was the chip leader when he entered into heads-up play against Chen. The British player went on to dominate the play after winning a hand with top set of aces. Two hands later, the curtain fell on Chen and Chidwick finally earned his first WSOP gold bracelet – something he’d been chasing for quite a long time. Chen took home a hefty $1,000,253 for his runner-up finish.

The $25,000 PLO High Roller was Chidwick’s first event at the WSOP this summer, having spent the previous two weeks with his family in Paris. It came as an unusual move for the British poker pro, who, during the previous editions of the festival, would always take time to play almost every single event at the Rio.

Chidwick’s latest victory brings his total career tournament earnings to $24,749,230, putting him at No. 15 on Hendon Mob’s All Time Money List, and represents his second seven-figure score this year. In March, he also placed second in a HK$1,000,000 No Limit Hold’em event during the Triton Poker Super High Roller Series in Jeju, South Korea, winning $1,128,685. 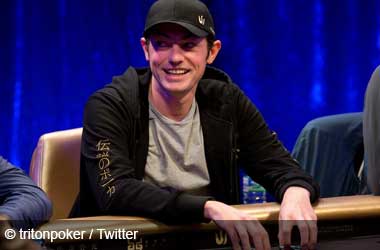