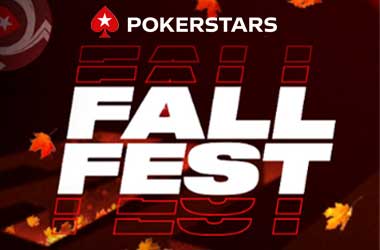 PokerStars Ontario is currently hosting its latest tournament series, “Fall Fest“. The festival kicked off on November 19 and will take place until November 28, 2022.

It is the fifth major online tournament series hosted by PokerStars Ontario since going live in the province in late June. It follows the hugely successful Ontario Championship of Online Poker (ONCOOP) which wrapped up in October.

Fall Fest features $550,000 in total guarantees spread out across 57 tournaments, nearly half of which are progressive knockouts (PKOs). Most of the events on the schedule are in the mid-buy-in level, with entry fees of between $20 and $50.

Apart from PKO, the schedule also includes other formats and variants, such as the popular No-Limit Hold’em and Pot-Limit Omaha, as well as Short Deck, 5 Card Omaha, PL Courchevel, and Omaha Hi/Lo.

Fall Fest has the smallest guarantees compared to the past four festivals run by PokerStars Ontario, but it does not disappoint when it comes to the average guarantee per tournament as it offers the third-largest at $9,682, surpassed only by the Platinum Series ($11,111), and ONCOOP ($14,925).

A similar series is also running in PokerStars’ US markets in New Jersey, Michigan, and Pennsylvania, featuring nearly $2 million in combined guarantees.

The Ontario Fall Fest is headlined by the fall-themed Main Event named “The Feast” which has a buy-in of $200 and guarantees $75,000. The schedule also includes a High Roller event which costs $1,000 to enter, and a $50 buy-in, $5K GTD PLO Main Event.

The US poker version of the series is awarding Platinum Passes. It remains unclear whether PokerStars Ontario will do the same. Ontario players must stay tuned for the latest updates.