It didn’t take Jean-René Fontaine too long to emerge as the victor in the €1,000 EPT National at this year’s EPT Barcelona.

Fontaine beat out 4,347 other players to win the top prize of €547,000. He was also awarded a Platinum Pass worth $30,000 which gets him a set at the upcoming PokerStars Players No-Limit Hold ‘em Championship (PSPC) which takes place in the Bahamas in January.

Fontaine who resides in the Réunion area in France disposed of runner-up Julien Martini who walked away from the event with €323,000. Third place finisher Alberto Ah-Line, who also happens to be from Réunion, took home €242,000 while Claudio Di Giacomo won €197,000, Jerome L’Hostis got €155,000, and Jan Teunis enjoyed a €123,000 payday for finishing sixth.

Surrounded by his supporters, Fontaine beamed as he held the trophy and stated that he was very happy.

The Road To Victory

The final table of six convened at noon local time with each of them guaranteed at least €123,000. Teunis shoved with a king-queen out of the big blind but Fontaine’s ace-eight ended up being the better hand. At this point, Fontaine and Martini had big leads on the remaining three. Fontaine sat back and let Martini go to work on small stacks.

L’Hostis would be the next to fall as Martini called his all-in bet and won on the river. Martini then knocked Di Giacomo out before Ah-Line became his next victim. In the final hand of the tournament, Fontaine was dealt an ace-three while Martini held a suited six-seven. The flop came down ace-queen-seven and both players checked. However, Martini shoved all-in after a two showed up on the turn. It was an easy call for Fontaine who jumped up, pumped his fist, and took down the pot.

Fontaine said that he was even happier that there were 4 French players battling it out at the final table. Even though Jean-René has the utmost respect for fellow Frenchman Julien Martini, Fontaine said that he felt that there was something special happening and he knew that he would prevail. Fontaine claims that this victory won’t change his life and he will continue to take things day by day.

Will Compete In PSPC

The addition of a Platinum Pass on top of his cash prize is exciting for Fontaine and he promises to be there to compete in the grand event that is being held in the Bahamas this coming January. He sees the PSPC as a unique opportunity and he also added that he hopes to take a trip to Las Vegas. 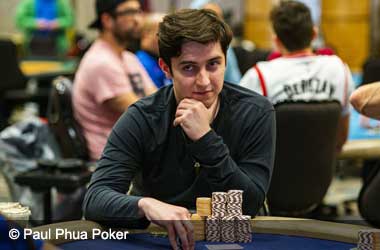