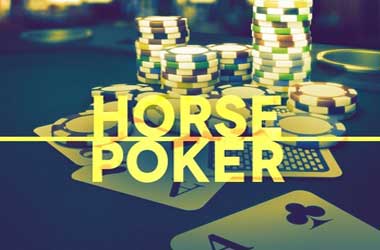 The most popular poker variants are not always the most profitable, as their popularity will lead to players studying them intensely, making them rather difficult to beat. HORSE is a mixed poker game combining several poker variants, and not all of them are extremely popular.

Players in a HORSE tournament or cash game might be very proficient in two poker variants, but lack experience in the rest of the poker variants that make up a HORSE game.

Therefore, to become a decent player in all poker variants can be quite profitable, especially when playing H.O.R.S.E.

Fixed Limit Poker and How to Bet

HORSE is normally played in a fixed limit format, meaning players must place all raises and bets in pre-determined increments which is relative to the stakes on the table. For instance, in a $1/$2 table, a player will either use the $1 lower stake or the $2 upper stake depending on the poker variant they are playing, and the stage of the hand they are in.

In HORSE, the first game played is Texas Hold’em and it’s considered the poker variant that players are most familiar with. However, the twist in HORSE is that Texas Hold’em is played in a fixed limit format as opposed to a No limit format which most players are used to. In Texas Hold’em, every player will receive two face down cards and should then combine their two cards with the five community cards that are dealt face up in the middle of the table to form the best possible five-card hand from the seven cards available to them.

Omaha is essentially based on the same rules as Texas Hold’em, but every player will receive 4 hole cards and need to combine their hole cards with the 5 community cards that are dealt in the middle of the table for each player to use. Players are required to use two hole cards and three community cards to create the best possible 5 card poker hand. Omaha is also played in a fixed limit format which is another twist in HORSE as most players will be used to playing Omaha in a pot limit or no limit format.

Razz is a completely different game to play when compared to the other poker variants in H.O.R.S.E, as the aim of Razz is to get the lowest poker hand ranking as opposed to the highest poker hand ranking. Razz is played in a very similar fashion as 7 Card Stud where every player will receive a total of 7 cards during a hand and will need to use 5 cards in their hand to form the best possible lowest hand ranking. Ace will count as low and low hands will be read from the highest card downwards. Therefore, the best hand in Razz will always be A-2-3-4-5.

7 Card Stud is very similar to Razz as every player will receive seven cards throughout a 7 Card Stud hand. The main objective of 7 Card Stud is basically a reverse of Razz, as each player needs to get the highest possible poker hand ranking instead of the lowest possible hand ranking. In stud poker, there are no community or share cards that you will find in Omaha and Texas Hold’em, and therefore players can only use the cards that have been dealt to them.

7 Card Stud 8 or Better, also referred to as High Low or Hi-Lo, is a slight variation of 7 Card Stud. Every player at the table will receive a total of 7 cards during a hand. However, this time they will have a mixed objective and 2 different hands to form from the 7 cards they received. The first objective is to form the highest possible 5 card poker hand just like in regular seven card stud. The player with the highest hand ranking will receive half of the pot winnings. The second objective is to form the lowest possible 5 card poker hand which is very similar to Razz. But, the difference is that the hand can only qualify if there’s no card higher than eight. The player holding the lowest qualifying hand ranking will be awarded the remaining half of the pot winnings. Should no player have a qualifying low hand, the remaining pot will be awarded to the player with a high hand.

Mixed poker games, such as HORSE, is growing in popularity at a rapid pace, especially online. Thinking players find mixed poker games extremely profitable thanks to the huge number of inexperienced players they attract. Therefore, we included a couple of important tips to improve your overall HORSE strategy.

In Omaha and Texas Hold’em, position is considered one of the most vital factors in any given hand. Due to this, a player should look to play wider ranges while in position as opposed to out of position. That way, your card edge could make up for the positional disadvantage when out of position, and you will be able to play more pots when having the positional advantage. Also keep in mind that competent opponents will always be positionally aware, and will play wider pre-flop ranges while in position. The quickest way to find out who is positionally aware is to pay attention during showdowns.

7 Card Stud, Split 8 or Better, and Razz are poker variants of showdown. With a full table, there won’t be a lot of pots that will be taken down with a bet prior to the last street. This is especially true in Split 8 or Better with two half-pots available. The key to these poker games is to play hands that can allow you to win during a showdown, and to throw away those that require a lot of assistance to win during a showdown.
A player should always expect to take their hand to a showdown if they wish to win. A vital part in understanding when a hand could make it to a showdown will involve paying attention to every up card on the table. Drawing hands that could have been quite strong is weakened when most of the outs are already displayed on the table. A player should always pay attention to the table to understand the chances they have of making a hand.

In most poker variants, especially in fixed limit poker games, it is very important to bet and raise your strong hands. There is essentially no value when you decide to play it slow unless your opponent refuses to call, and instead decides to bluff. This is extremely rare and could be quite difficult to spot when it occurs, so you’ll normally be better off simply taking the aggressive route by betting and raising your strong hands.

To read an opponent’s hand in any poker variant is a rare skill. Understanding the type of poker player you’ll be playing against is crucial when it comes to hand-reading. Knowing how your opponent thinks can allow you to interpret many of their actions correctly. You can categorize your opponents and use the knowledge to narrow the ranges when playing against them in a hand. Actions that are made out of character normally helps to narrow down the range the quickest.

The most effective way to be a great H.O.R.S.E player is to identify which players have a weakness in each of the poker variants of H.O.R.S.E. Once you know which players are weaker and stronger in a specific poker variant, its best to avoid playing huge pots against players who are stronger than you and that are in their element.