The British poker pro managed to capture the first seven-digit payday of the 50th WSOP by battling with some of the best high-stakes players in the world. Heath’s latest victory is by far the largest in his WSOP career, earning him his first gold bracelet.

Heath entered the final day with five other players, all of whom were bracelet winners. The final six started with an average stack of 40 big blinds, with US player Nick Petrangelo and Russia’s Dmitry Yurasov having the shortest two stacks.

American poker pro Chance Kornuth was the first casualty of the final table, losing most of his chips to Yurasov and eventually being pushed out of the game by fellow American Andrew Lichtenberger. Kornuth ended his quest for the seven-digit top prize in sixth place for $251,128. Petrangelo was the next to exit after failing to find defense against Heath’s queens. The two-time WSOP bracelet winner finished fifth, taking home $335,181.

With four players remaining, Heath was initially leading the chip count until he lost a big pot to Lichtenberger. Moments later, both players were battling it out for the dominant position, alternately claiming the chip lead.

A controversial out-of-turn fold by Sam Soverel, which everyone considered an “honest mistake“, proved to be an important turning point for Heath, leading to Yurasov’s demise. Yurasov was obviously disappointed after missing the mark. He earned $458,138 for his fourth-place finish. A couple of hands later, Soverel left the table after losing with king-jack suited against Heath’s ace-king.

A heads-up play ensued between Heath and Lichtenberger, with the former holding an 18 million to 14 million chip advantage. Lichtenberger initially managed to even out the stacks but Heath just wouldn’t give up. Not long after, Heath called an all-in from Lichtenberger leading to his ultimate victory. Lichtenberger finished second and won $917,232.

Heath could be seen holding his first WSOP bracelet, posing for a photo with close friends who cheered for him throughout the final table.

As the WSOP festival is only a week in, Heath has no plans to rest on his laurels. After his WSOP victory, Heath’s total live earnings have climbed to $4,531,448. 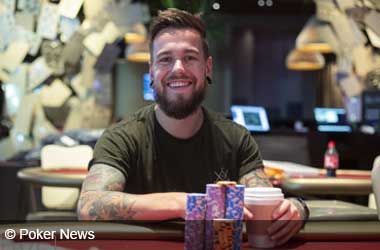