After three days of top-notch poker action, Ole Schemion became the fourth player to have his name added to a limited list of World Poker Tour (WPT) champion of champions.

The German poker star topped a field of 76 entries to win the Baccarat Crystal WPT Tournament of Champions which took place over the course of three days from June 1-3, at the HyperX Esports Arena in Luxor, Las Vegas.

Schemion managed to work his way to the top of a tough final table, competing against some of the best in the game, including Tony Dunst, Ryan Tosoc, Simon Lam, Griffin Paul and Nick Schulman.

The final table started with Schemion being the chip lead, but the German pro lost a huge amount of those chips early in the game. At one point he came in third in chips and almost got busted during a pivotal hand with three players remaining.

Ole Schulman was the first to leave the final table after a devastating hand which saw the poker commentator calling from the cutoff after Lam opened to 17,000 from the hijack. Tosoc moved all-in from the big blind, Lam folded, with Schulman eventually making the call. When the cards turned over, Schulman was initially ahead of Tosoc, but a queen on the flop gave Tosoc the edge and soon after, Schulman hit the rail in sixth place for $63,890.

After nearly two hours, Paul was the next to get eliminated in fifth place for $84,140. Schemion raised from under the gun to 35,000, with Lam defending his big blind. When the flop came, Lam check-raised for 178,000 against Shemion’s bet of 50,000. Schemion called. The final card dealt was ace of hearts, sending Lam out of the game in fourth place for $115,945.

During one of the most interesting hands of the final day, Schemion opened the button to 35,000; Tosoc three-bet to 125,000 and Schemion called. Tosoc then check-called Schemion’s bet of 65,000 and after the turn, the latter moved all in for 500,000. Tosoc eventually made the call and almost eliminated Schemion, if not for the queen of spades which landed on the river just in time to save Schemion. Tosoc finished third with $166,845.

Tosoc’s exit left Schemion and Dunst competing for the top prize, with Schemion holding the chip advantage. After 17 hands and a little less than an hour of heads-up play, Tony Dunst finished in second place for $250,265. 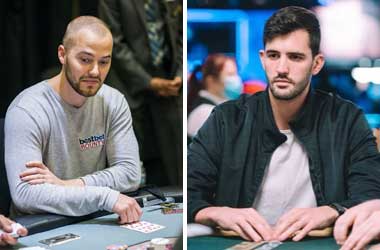