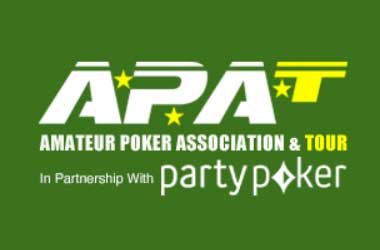 Since starting in 2006, it has put together multiple live events for amateurs all over the world, giving them the opportunity to take a shot at decent prizes for a modest fee.

However due to the coronavirus pandemic, events and activities sponsored by the association have been suspended and live venues have been closed. To keep the action going for its members, APAT has joined forces with the world’s second largest online poker site partypoker in organizing daily online tournaments.

Among the online tournaments launched by APAT in partnership with partypoker is the Daily Splash, which carries a buy-in of just $5.50. It takes place daily at 3:00pm on partypoker.

APAT has also been focused on fostering relationships and building a strong community, and with this, the association also organized Poker Squads, a team-based tournament also running every day at 8:00pm on partypoker.

Each competing team is made of up to four players, and they can take part in a variety of formats, such as No-Limit Hold’em, Pot-Limit Omaha, No-Limit Hold’em PKO, Deepstack, Mix-Max, and PLO Hi/Lo 6-Max. If you new to the world of online poker why not get some tips on how to play texas holdem.Apart from the prize money up for grabs, the $5.50 buy-in tournament, also awards extra prizes to teams recording the highest three scores during each week.

Players may also take part in Heads-Up tournaments taking place every Tuesday, as well as in a Seven-Card Stud tournament running on Thursdays. Both carry the same buy-in of $5.50.

Amateurs who are into high roller action may also get themselves involved in the APAT Sunday Roller, which has a buy-in of $55. Players can buy-in directly, or they may enter for a more affordable fee of $5.50 by playing in Phase 1 tournaments taking place daily. You are allowed to enter these Phase 1 tournaments multiple times, but only your biggest stack will be carried over if you advance more than once.

At the end of each week, the APAT Championship Friday PLO takes place. For a buy-in of $16.50, players kick off the action every Friday with 100,000 in starting chips played in eight-minute levels. A champion is crowned the following day.

Every Tuesday, Thursday, Saturday, and Sunday at 10:00pm, you may tune in to The APAT Show on the association’s Facebook channel, and join friendly conversations and discussions regarding poker and other relevant topics. The show is hosted by Leigh Wiltshire and Des Duffy.