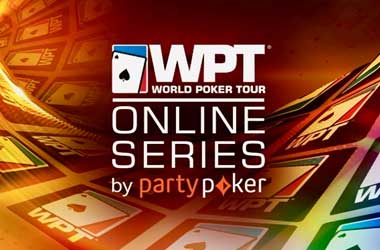 The World Poker Tour (WPT) has announced a partnership with the second biggest online poker firm in the world. The WPT will partner with partypoker to present the first ever WPT Online Series (WPTOS), featuring a number of poker events played out exclusively through the partypoker software platform.

The WPT has been broadcasting poker content since 2002, where it helped usher in the golden age of poker, while partypoker has grown in leaps and bounds in the last three years. The WPTOS is scheduled to begin on May 10, 2020, with its last day being May 26, 2020.

The WPTOS is highlighted by the $3,200 buy-in WPT Online Championship, which features a $5 million guaranteed prize pool. The WPT Online Championship is expected to take up the entire schedule of the event; Day 1 flights will be made available by May 10. The WPTOS as a whole features $30 million in guaranteed prizes, with the WPT events guaranteeing at least $7 million to its winners.

In addition to the WPT Online Championship, the WPOTS will also feature two of its most famous brands, the WPT DeepStacks and the WPT500, in the event lineup. The WPT500 Online event is slated for May 10 to 18, with a $1 million guaranteed prize pool—10 starting flights are already on the schedule.

The WPT DeepStacks Online event will bookend the entire WPTOS, set to take place on May 25-26, with a guaranteed prize pool of $1 million. The WPTOS is the first real money poker event for the WPT to be conducted wholly online.

WPT CEO Adam Pliska said the partnership with partypoker is new ground for both companies. Pliska stated that, with the first WPT Online festival, players from all over the world will be able to test their skills against the best in the world in WPT events from home. Because of the variety of buy-ins available, Pliska expects that the WPTOS will appeal to poker players of all different kinds.

WPT Europe’s vice-president Hermance Blum also expressed his excitement for the upcoming online tournament. He said given the fact that the WPT events on partypoker will have $7 million in guaranteed prizes, it sets a new milestone for both companies.

Blum is especially looking forward to crowning the inaugural winner of the WPT Online Championship, as the winner will play in the WPT Tournament of Champions!