Over the last couple of years, King’s Casino in Rozvadov has built a reputation for itself as being the number one spot when it comes to hosting top poker tournaments in Europe.

The casino has the biggest poker room in Europe and will play host to two major poker tournaments in March and April.

The next few weeks will be action-packed at King’s Casino as it gets ready to first host the 2019 World Series of Poker (WSOP) Circuit from March 14 to April 1 which will then be immediately followed by The Big Wrap which will run from April 1 to 8.

King’s recently announced the full schedule of this year’s WSOP Circuit, with 15 gold rings up for grabs. The WSOPC is one of the most popular poker tournaments in Europe and one can expect the top poker players from all over Europe to make their way to the Czech Republic to have a crack at winning a WSOPC event and a coveted ring.

While the WSOPC event has received a lot of publicity, the Big Wrap has flown under the radar. Poker players who attend the 2019 WSOPC will be encouraged to stay on and take part in the Big Wrap.

The Big Wrap will adopt a pot-limit Omaha (PLO) theme, steering away from the mainly no-limit hold’em format followed by major live poker tournaments. The Big Wrap will feature one week of PLO cash game action, with one event carrying a massive guaranteed prize pool of €1 million.

Among the players confirmed for what is set to be one of Europe’s largest PLO tournaments are King’s Casino proprietor Leon Tsoukernik, Fernando “Jnandez” Habegger, Bertrand “ElkY” Grospellier of Team partypoker, and the legendary Antanas “Tony G” Guoga.

Players will be able to play PLO cash games beginning at €5/€5, and they will have the freedom to choose the game they’d want to play.

The action begins with a €550 buy-in Warm Up, carrying a guaranteed prize pool of €200,000. The event will have three starting flights taking place on Monday, April 1 to Wednesday, April 3 at 6:00pm. Players start with 30,000 chips, and unlimited re-entries are allowed.

The Big Wrap is the main highlight of the schedule, which begins on April 5. It has two starting flights running through April 6. The event has a buy-in of €2,350 and features a guaranteed prize pool of €1,000,000. Players sit down with 100,000 chips, played at 40/60 minute blinds. Only two re-entries are permitted. 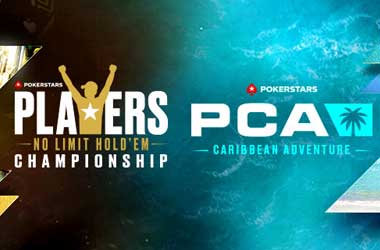